Ancestral land plants appeared about 410 million years ago. Compared to green algae, land plants are characterized by a waterproof cuticle limiting dehydration and protection of spores that are enclosed in a sac protected by an envelope. Ferns and related plants have conducting tissues which help to grow above the ground. The most derived taxa are heterosporous in order to statistically increase genetic intermixing. Among ferns, pollen grains do not exist and spores are the way of species propagation. More fragile than pollen, these spores will under favorable conditions (a moist and shady land), give birth to a flattened and green body, a prothallus. At this stage, gametes will be produced. Once fertilization is realized, a new fern will be formed. These stages, especially prothallus growth and fertilisation, needs a moist land or water (sperm swims in water to reach the female organ). —- 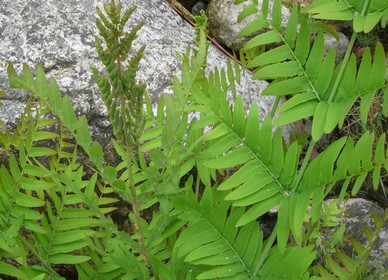 In Osmunda regalis, sterile and fertile fronds are separated. —– In Gymnosperms, which appeared 260 million years ago, fertilization doesn’t need water, and the evolutive steps are the followings: the pollen grain which is transported by wind. It helps intergenetic mixing ; the seed. It helps species survival and dispersion. ——- 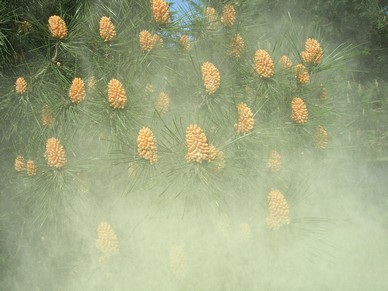 Gymnosperm pollen is transported by wind. On this picture, a cloud of pine pollen grains. ——– Ultimately, among Angiosperms also called flowering plants, survival and dispersal of seeds become more efficient with the carpel and the double fertilization (50 million years ). Trends in evolutionary history of land plants are: -releasing of coercion “water” in the life cycle of plants; -facilitating genetic intermixing; -securing fertilization and embryo development; -establishing mechanisms to ensure the survival and dispersal of the offspring. Though the flowering plants or angiosperms are the land plants, which are differentiated later on, their radiation is the most important.

The relationship between insects and plants flowers 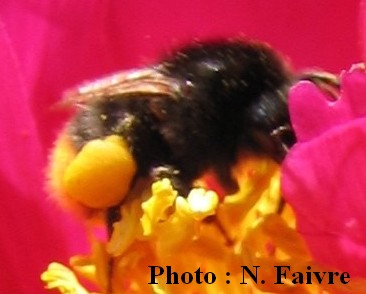 Pollen is stuck on the legs of the insect. During insect search for nectar, pollen will be deposited on another flower thus promoting genetic mixing and evolution of the species. Photo: Nathalie Faivre ——- In contrast insects can be used by flowering plants: – as vectors for pollination; – as food (insectivorous plant); – as a mean of transportion for seeds; – as sowers (weeding or seeding ants). Pollination is the relationship that has allowed the development of many adaptations of both sides.

The pollen of flowering plants

The pollen grain is a gametophyte, ie a “plant” producing gametes, and not a gamete itself. It has to be compared to the fern prothallus. When its transportation is provided by insects, it is of great size, with exine (the outer shell of pollen) ornamented to facilitate attachment to the bodies of insects. It is produced by the stamens often situated inside of a colorful and visible flower producing nectar. —— 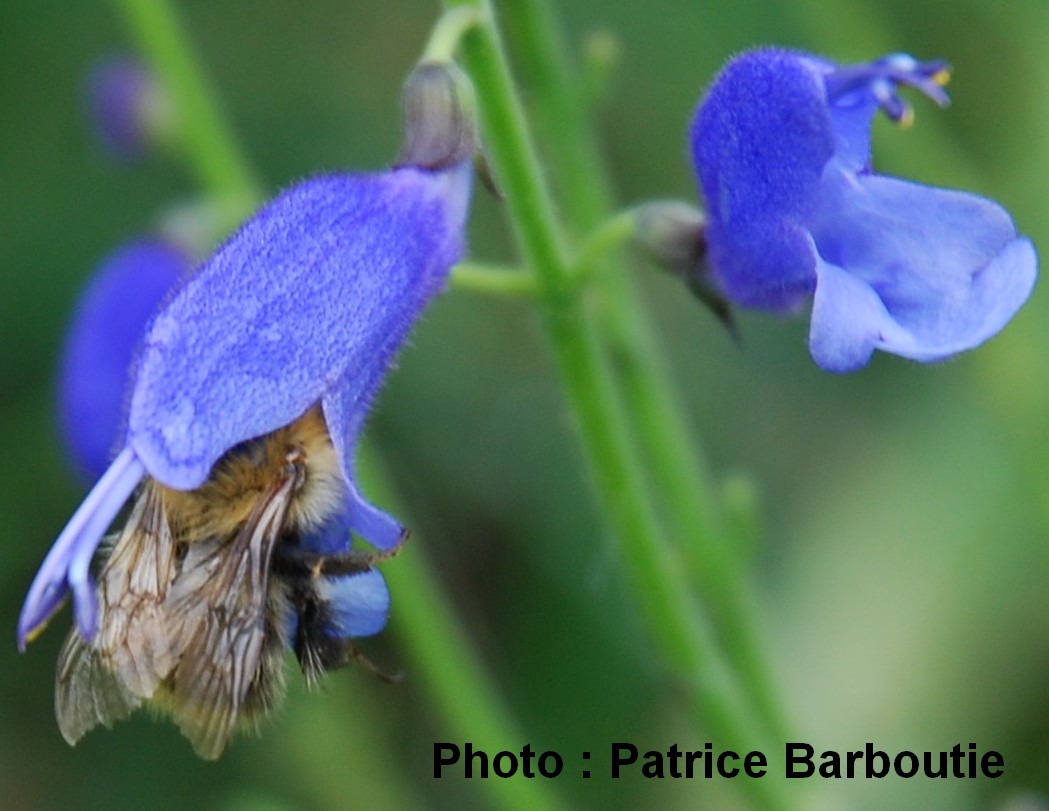 Among the sages, the colorful and flowers attract pollinating insects. When entering inside the corolla, the insect makes the stamens tip over to deposit pollen on its back. Photo: Patrice Barboutie —— Insects provide 84% fertilization of crops and 80% of wild plants. They carry pollen up to 2 km around the hive for bees around the hive (Ramsey et al., 1999). The normal distance pollination of a drone is between 70 and 631 m, even when crop fields are very close (Osborne et al., 1999). In contrast, among the flowering plants pollinated by wind, pollen is small in size, with a smooth exine. Anthers are attached to a long filament and are pending out small and inconspicuous flowers. Among grasses, pollination is anémophilous. Flowers are discrete (sepals and petals are absent), pollen is small, exine is smooth and anthers are attached to the filament by their middle, (it facilitates their sway in the wind and the pollen release). —– 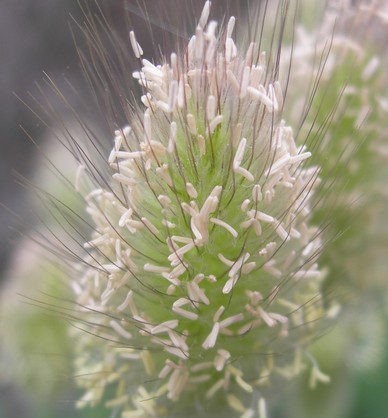 Grass pollination is anemophilous —– Some examples of pollination by insects Among Asteraceae, the capitule has a significant effect of display due to the high number of flowers. In some plants, flowers inserted at the periphery are sterile: they have no direct sexual role but serve to guide insects to those fertile at the center of the inflorescence. After fertilization, the fruit is transported by wind or animals. Among Fabaceae with papilionaceaous corolla, corolla is made of a large posterior petal (banner or standard), two lateral petals (wings) and two connate lower petals (keel): with this corolla, insects are led to the sexual organs of the flower. Among Orchidaceae, attraction of pollinating insects is due to several factors: – nectar production (Orchis and Spiranthes); – spur which can attract insects; – mimicry with nectar plants (genus Orchis); – sexual lure (genus Ophrys). Once the insect attracted by the flower, the peculiar morphology of corolla and sexual organs allows the gluey pollen to be stuck on the body of the animal. Pollen is then carried and set down on the female organ (stigma) of the next pollinated flower. —- 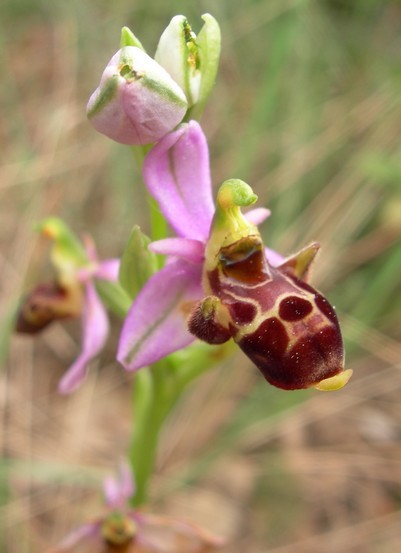 In Ophrys scolopax, labellum looks like an insect pollinator. The male insect is adult before the female. It is attracted by the labellum morphology but also by the flower smells that is similar to female sexual pheromon. ——- In orchids, other factors may intervene on pollination: morphology of the inflorescence (Spiranthes aestivalis : Summer lady’s-tresses), position of flowers in the inflorescence (Spiranthes spiralis : Autumn lady’s-tresses), production of chemicals that smell as the insect pheromon. Interspecific hybridization may be possible (for example between Monkey orchid, Orchis simia, and Man Orchid, Orchis anthropohora ex Aceras anthropohorum) when the pollinator is common between these two species. In aroids, pollinating insects are attracted by the stench emitted by the inflorescence, a spadicea enclosed in a spathe. Female flowers located towards the bottom of the inflorescence are fertile before the upper male flowers (protogynie).There are also sterile flowers sterile, male or female, which regulate the passage of insects from one level to another spadicea. In Arum italicum, insects that carry pollen are trapped at the lowest level of the inflorescence (fertile flowers level) by the female sterile flowers appendages. When pollination and fertilisation are completed, appendages of sterile female flowers wilt and insects can reach the male flowers that became fertile meanwhile. At this level, pollinators are trapped by the sterile male flowers appendages untill new pollen is stuck. Then the appendages of sterile male flowers wilt, pollinators can leave the spathe to pollinate another plant (allopollinisation). In the Moraceae, fig pollination is unique. Among the 800 Ficus species in the world, each of them has a specific pollination mutualism with a hymenoptera, an Agaronide. Like Araceae, Ficus nflorescences are protogynes: females flowers are fertile before males. The Agaronide larvae develop in sterile female flowers which grow into galls. Male insects are adults before females, they have no wings. They open a hole into the fig, fall onto the floor and die. When adults, female insects fly to escape from the fig and then pollen is loaded by contact with fertile male flowers. Female insects finally find the hole dug by male insects, fly to pollinate another fig. Female insects enter in young fig inflorescences through an aperture (that will enclosed during fruit maturation), lay eggs and pollinate the fertile female flowers with pollen taken earlier in the other inflorescence. Other actors are involved in this mutualism: parasites of the pollinators, predatory ants attracted by both parasites and pollinators through chemical olfactive messages. Relationship between insects and flowering plants are old Among ancestral Angiosperms, pollination was already assured by beetles that eat the pollen. 80% of flowering plants are currently pollinated by insects. Relationship has become more complex and it can be called, in some cases, co-évolution (orchids) or mutualism (Ficus) depending how deep and complex the both life cycles are linked. Whatever their degree of complexity, this relationship probably explains the important radiation of Angiosperms though this taxomical group is recent compared to other terrestrial plants.